Cloaked in the snows of California’s Sierra Nevada, the 3,200-year-old giant sequoia called the President rises 247 feet. Two other sequoias have wider trunks, but none has a larger crown, say the scientists who climbed it. The figure at top seems taller than the other climbers because he’s standing forward on one of the great limbs

National Geographic shares photos of the second tallest tree in the world found in California’s Sierra Nevada. To take the photo, it took 126 frames to cover the epic 247 foot tree.

The tree is more than three millennia-old, and contains about “54,000 cubic feet of wood and bark,” according to National Geographic magazine.

A few years ago, photographer Michael Nichols photographed a 300-foot giant in California’s Prairie Creek Redwoods State Park. The magazine’s December issue has a follow-up: a huge tear-out of the “President,” a snowy monolith in the Sierra Nevadas.

“It’s not quite the largest tree on Earth,” the magazine article reads. “It’s the second largest. Recent research by scientist Steve Sillett of Humboldt State University and his colleagues has confirmed that the President ranks number two among all big trees that have ever been measured — and Sillett’s team has measured quite a few.” 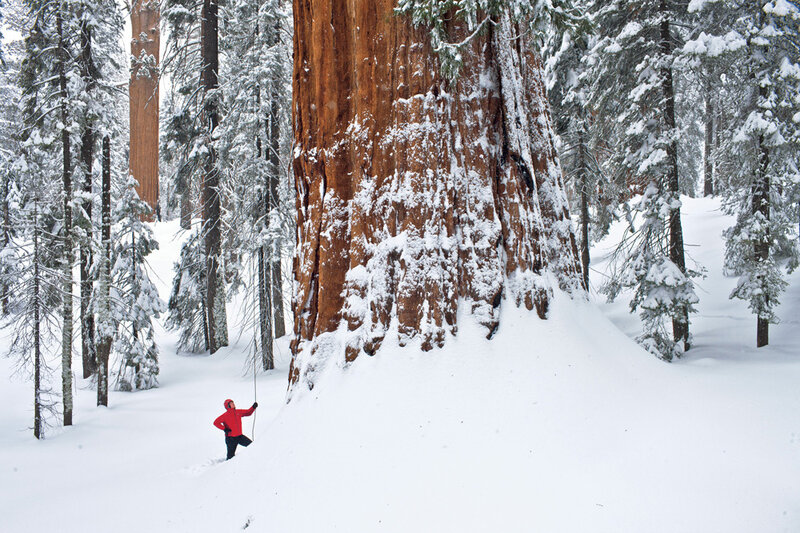 The giant sequoia is a snow tree, says scientist Steve Sillett, adapted for long winters in the Sierra Nevada. But it’s a fire tree, too. Thick bark protects it from burning in lightning-caused fires, which open cones and clear the understory, allowing saplings to find light and prosper.

Sillett and his team are carefully measuring trees like the President by climbing them — and they’re making interesting discoveries in doing so.

What they have found, the article explains, is that despite popular belief, sequoias continue to grow rapidly even in old age. In fact, the yearly output of wood produced by a tree like the President is greater than that of younger trees. This research might overturn the long-standing premise that “has justified countless management decisions in favor of short-rotation forestry,” the article reads.

There’s more over at National Geographic — including a video about how the photograph was made and more photos.